The situation is now changing for the better, and in the near future Ukraine will start receiving these tanks, which we desperately need to conduct both offensive and defensive operations

Waiting for Abrams and Leopard

Let's start first with the good news that is spread in respectable foreign publications. According to The Wall Street Journal, this week it is expected that the US may officially announce the delivery of Abrams battle tanks to Ukraine. The Biden administration is inclined to transfer a significant number of Abrams tanks to Ukraine, but so far it is about 10 samples. The announcement of the transfer of the Abrams is part of the agreement with Germany.

And Germany itself has already on January 25, given permission to Poland regarding the re-export of Leopard tanks to Ukraine. On Tuesday, January 24, Poland officially applied to Germany for the right to re-export, and as we know, Poland plans to transfer 14 Leopard tanks to Ukraine in the first package. In general, it is known that 12 European countries reached an agreement during Ramstein that they can transfer to Ukraine a much larger number of Leopard tanks, up to 100 examples. But this was not reported, because at that time it was not agreed at Ramstein that the re-export of these tanks would be allowed by Germany. However, now the situation is changing for the better, and in the near future, Ukraine will begin to receive these tanks, which we desperately need to use to launch both offensive and defensive actions.

The situation on the fronts remains extremely tense, where the Russian forces continue to make efforts to enter the administrative borders of the Donetsk region and Luhansk region, and for the seventh month in a row, they have been slaughtering the army and the Wagner PMC in the Bakhmut area. All this time, the enemy is trying to take Bakhmut, try to bypass it from the flanks, then cut the supply lines to the city, but all this ends in colossal losses for the enemy.

Yurii Syrotiuk, a sniper with the 5th Detached Assault Regiment of Ukraine's Armed Forces, said that after January 7, the enemy became significantly more active throughout the Bakhmut front, especially on the northern flank in the Soledar area. Similarly, on the southern flank, the enemy is trying to get out and cut the Kostiantynivka - Bakhmut highway. The Russians are also trying to reach the route from Sloviansk in order to cut off the supply to Bakhmut. In recent days, we see that the enemy has changed tactics and returned to the old one - to attack head-on and in large groups. To be honest, we have never seen such ridiculous offensive attempts. 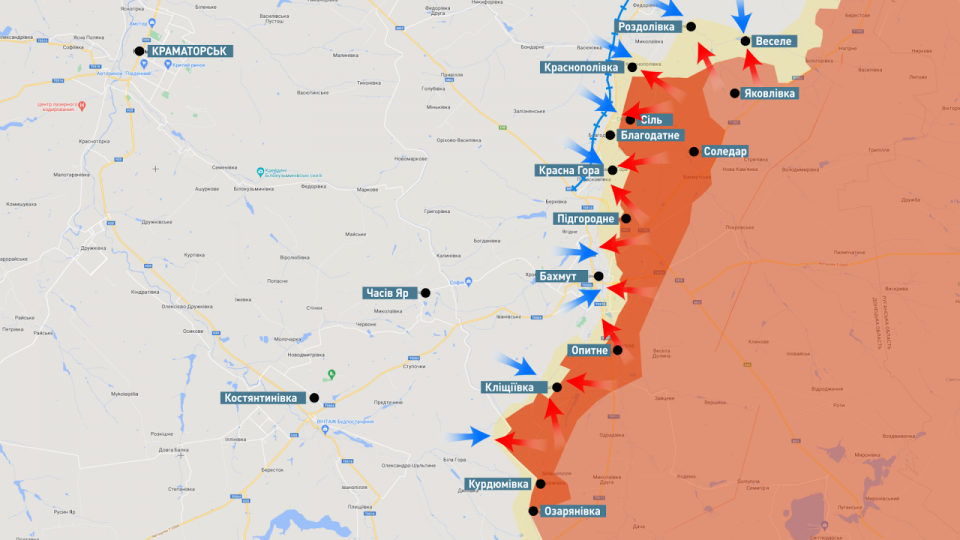 Yurii Syrotiuk added that at the site he works with the American Mk 19 automatic grenade launcher, which fires at a distance of up to 2 kilometers and hits personnel at 6 meters, has a dual effect, cumulative and high-explosive fragmentation. We detect the enemy servicemen at a distance of about 2.5-3 km when they approach the lines and can fire. Firstly, we meet the enemy with the fire of grenade launchers, and then we finish them off with heavy machine guns. Day after day we observe the same picture - the accumulation of enemies and their attempts to advance. We destroy the enemy, they leave their killed, retreat, and the next day the same story begins.

Now, in the north of this flank, the enemy has accumulated heavy equipment. Enemy tanks are working, which was not the case at the beginning. The enemy has also brought up artillery and mortars, and enemy aircraft are operating every day. But we are holding the front. In some places, we were squeezed out a little, but in general, all the enemy's attempts look like senseless suicide, that is, the enemy is draining the army. If they continue to fight at such a pace, it is difficult to imagine who they are going to attack in other parts of the front.

Syrotiuk noted that the front has become more active in those places where the enemy does not attack in large numbers, but he still makes reconnaissance in force. Even the flank positions, which were relatively calm, were also subject to constant attacks. That is, the enemy gropes and looks for weak areas, trying to exploit this situation. It is obvious that they have some direction; despite the sacrifice and loss of human life, the Russians have the order to advance. And we know that they do it under duress because sometimes we have access to their radio conversations and hear how they are chased away with a mat and the threat of shooting. They advance not with an idea and courage, but because they are driven in the back. On our part of the front, we oppose the Wagner soldiers.

A military officer of Ukraine's Armed Forces explained that the Russians accumulated the armored vehicles because they advanced a little to the north of Bakhmut, respectively, occupied industrial buildings and brought equipment there. In addition, we see that enemy tanks operate from closed positions, like artillery. They still do not support the infantry, do not go alongside the infantry, in fact, the enemy uses tanks as stationary guns hidden behind houses. And here, on the northern flank of the Bakhmut direction, their infantry managed to advance a little at first, and then the enemy artillery was already moving up. We see that it appears more. Unfortunately, the enemy maintains a numerical advantage, especially here on the Bakhmut front. There is no parity yet.

Western tanks at front will be supported by Ukrainian artillery - Reznikov on Bohdana self-propelled guns testing
22:27

Russia feeds its people with ideas of war against NATO and prepares them for defeat - political analyst Mahda
21:15
Exclusive

Russia loses as many soldiers in Bakhmut direction as in both Chechen wars
20:39
Exclusive

Poland can supply Leopard 2 tanks to Ukraine in coming weeks
19:43

Next Ramstein meeting to take place on February 14 at NATO HQ
19:25

Why are Leopard-2, Abrams, and Challenger-2 tanks important to Ukraine and what will they change?
18:31

EU-Ukraine summit should become summit of our European future. Poroshenko on results of Brussels visit
18:03

Massive missile attack. There are hits and 11 victims. Air defense has been activated
17:23

Support for Ukraine and sanctions against Russia. Japan outlines G7 priorities for 2023
16:29

President of Latvia. Helping Ukraine is only way to protect Europe
16:11

Rheinmetall company to supply Ukraine with shells for Leopard tanks
15:52

Zelenskyy on possible negotiations with Russia: Putin is nobody to me after a full-scale invasion
15:34
Exclusive

UK intelligence explains whether Russian units being trained in Belarus will have combat effectiveness
14:24
Updated

Russia’s army is weaker today than it was 11 months ago, but still dangerous - White House
14:07
Review

Heads of 5 states agree on close cooperation in military support for Ukraine
11:54