Russian channels have published a map of the Ukrainian Armed Forces' counteroffensive in the Kharkiv, Donetsk, and Luhansk regions

What conclusions can be drawn?

1. The front of the Russian Armed Forces' 20th Combined Arms Army on the Oskil River has been breached.

The Russian group got into the operational encirclement in Lyman. The withdrawal of the Ukrainian troops to Nevske and Terny will mean the closing of the last supply routes, sealing the encirclement, and the complete defeat of the Lyman-Yampil group.

2. The Russian command obviously understands the threat, but continues to hold Lyman and Yampil. The configuration of the Russian enemy's front is extremely disadvantageous for defense, as the invading Russian forces will not be able to hold such a front for a long time.

At the same time, the enemy cannot be underestimated. The control of the group is maintained, the invading Russian forces, as before, are superior to Ukraine's Armed Forces in heavy weapons and munitions. The battles are going hard. 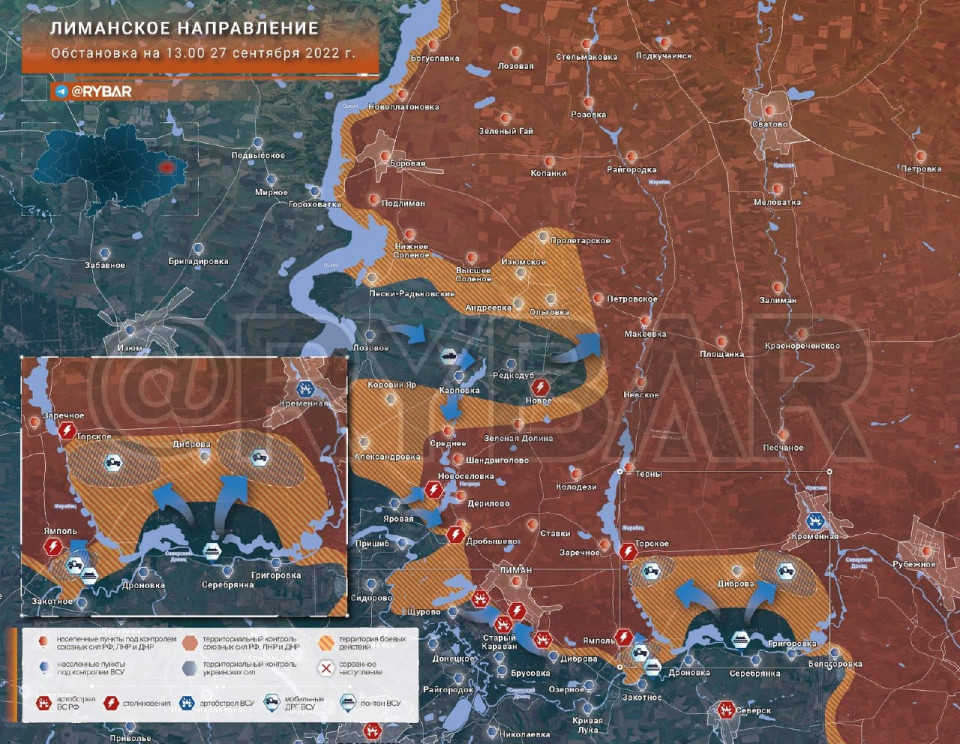 3. The Russian forces are transferring all possible reinforcements from wherever possible - for example, documents of servicemen with the 201st military base in Tajikistan, various regional and national units, and a number of BARS battalions have already been captured there. The marching reinforcements of the mobilized are directed to replenish the 144th and 3rd motorized rifle divisions in this area. Also, 61 brigades of marines and units of the Airborne Forces are used here.

4. Ukraine's Armed Forces have already reached Kreminna, and after the defeat of the Lyman-Yampil group, the Russian enemy will have to run far, to the route P66 Svatove-Kreminna.

5. There is no northern section of the front on the map. And there, Ukrainian troops also crossed the Oskil River, and are gradually moving forward to the north of Svatove. Battles for Svatove Kreminna look inevitable and in the near future.

Russians commit ecocide: about 50,000 dolphins died in the Black Sea due to Russian army actions
17:37

Russia continues war against Ukraine in order not to admit that Putin made a mistake
17:17
Exclusive

333 Ukrainian children are considered missing since the beginning of Russian full-scale war
16:51

US monitors amount of ammunition used in Russia’s war in Ukraine
15:42

The US provides Ukraine with "exclusively defensive" weapons, not intended for attacks on Russia
15:02

About Dozhd: You can sympathize with murderers or with victims. This is not an easy choice
14:42

US does not prevent Ukraine from developing long-range strike capabilities
14:40
OPINION

Regional Security Requires Ukraine and Hungary To Work Together
14:23

Ukrainian Armed Forces will be in Sevastopol, Donetsk and Luhansk in the spring - Oleksiy Danilov
13:23

Ukrainian air defense shoots down about 80% of Russian missiles
10:54

Dissatisfaction with military-political leadership is growing among Belarusian soldiers
10:34

Kremlin prepare for second wave of mobilization - Institute for study of war
09:34

Urgent surgeries and hospitalizations continue in Ukraine despite power outages
05:24

Ukraine’s ministry of energy urges to deprive Russia of its IAEA member status
05:04

Suspected deserter fires at policemen with a machine gun in Rostov region, Russia
03:44